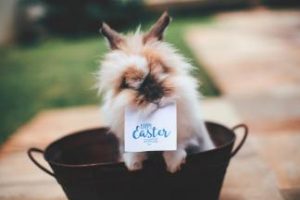 On Monday, 2 April Kaunas University of Technology (KTU) Students’ Union is inviting Kaunas residents and city guests to join Bunny Race in Laisvės Avenue. The only requirement for the participants is to wear bunny costume, or just a part of it, say ears or a tail.

The most active and inventive participants of the Race will be awarded prizes, and everyone will be invited to enjoy the concert by Baltasis Kiras. Organised by Kaunas students, Bunny Race is the first event of this kind to celebrate Easter.

Bunny Race is Kaunas’ students gift for the city not only inviting people to spend their time actively and making sports, but also contributing to the great cause: during the Race donations for Kaunas district children foster homes will be collected.

Registration for the Race begins at noon, and the Race starts at 12.30 pm. The participants will run from underpass in Vilnius Street and will continue through Laisvės Avenue until the crossroad with Maironio Street. The distance of the race is mere 900 metres, so it is easily achievable for runners of any age and physical preparation, and even for children.

The free concert, donated by Kaunas Cultural Centre will start at 1pm next to Kaunas Musical Theatre. Baltasis Kiras, indie/folk/rock group from Vilnius will perform the collection of songs from their two albums (issued in 2010 and 2014) and possibly some of the compilations from the upcoming album “Tekančiom upėm” (Eng. On the streams of rivers).

Read more on Bunny Race on Facebook and start working on your bunny costume (or on your workout routine).