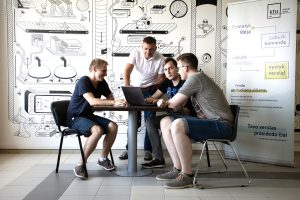 75 per cent commercial real estate growth, 7 universities releasing more than 7 thousand graduates every year, the first academic business incubator, KTU Startup Space, make more and more business-minded people choose Kaunas as their destination. Kaunas is famous for a qualified workforce, the open mindset of people and events for starting and seasoned entrepreneurs. One of those is “Creazone Reinvent” – a project aimed at re-inventing traditional business models, combining them with modern and innovative business ideas.

The project, organized for the second year, has already attracted thousands of participants, most of them in Kaunas.

CREAzone is an entrepreneurial education methodology that blends proactive people, traditional business models, and creative discoveries into promising ventures. The methodology was based on the Project Development Academy “Entrepreneurship promotion model”, launched in Lithuania and implemented by the INCYDE Foundation. The methodology was put into practice in 2012.

Started in Kaunas, “Creazone Reinvent” has attracted a lot of interest in other Lithuanian cities: currently, the project includes 4 groups in Kaunas, 2 groups in Klaipėda, 1 group in Šiauliai and 1 group in Panevėžys. Last year as well as this year, the organisers succeeded in attracting more than 1,000 people to the first phase of the project, focusing on topics such as presentation of a business idea, its development, public speaking, stress management, time management or creativity.

According to the organisers, Kaunas proved to be the perfect place for the start of “Creazone Reinvent”: both because of the universities and the progressive business companies operating in Kaunas, all of which help to bring together people with the right competencies who can assist in developing business ideas. Participants who already have developed ideas and teams to implement them are invited to join the community of KTU Startup Space – an incubator of early-stage startups in Kaunas.

This year, the training of the “Creazone Reinvent” project is sponsored and co-organized by “Enterprise Lithuania” and the “Spiečius” co-working spaces in Klaipėda, Šiauliai, and Panevėžys; as well as the Lithuanian Business Angels Network, who actively monitor the teams involved in the project and provide initial advice on developing a business idea.

A special prize from Kaunas Chamber of Commerce, Industry, and Crafts will be given to the team with the best-developed business idea which will provide the opportunity to gain experience in Western Europe, America or Singapore companies.

Information by “Kaunas IN” Business Division.

Berry juice processing by-products could reduce the risk of cancer

Kiran from India: “Lithuania gave me friends for a lifetime”

5 recommendations how to get through exams alive

Eugenijus Valatka is the new Rector of Kaunas University of Technology

2018-03-30
We are using cookies to provide statistics that help us give you the best experience of our site. You can find out more or switch them off if you prefer. However, by continuing to use the site without changing settings, you are agreeing to our use of cookies.
I agree