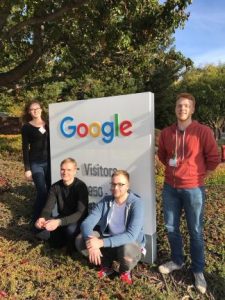 Students’ team from Kaunas University of Technology (KTU) is working on a development of dissolving contact eye lenses, which can be of great assistance for those suffering from glaucoma. According to statistics, glaucoma is the most common cause of preventable, irreversible blindness – it is responsible for 12.3% of blindness worldwide. It is being estimated that by the year 2020 there will be almost 80 million people in the world suffering from the condition.

The KTU team’s NanoLens idea of dissolving lens for glaucoma treatment has won the second place at the Silicon Valley Innovation Challenge in Best Global Innovation category. 150 applications were submitted for the competition. NanoLens team was formed during the Technology Entrepreneurship module, which is a part of the KTU curriculum.

According to economy and business student Viktorija Pacharevaitė, the idea to create dissolving contact lenses was based on practical purposes.

“I am wearing contact lenses myself, so I am familiar with the problems this causes. However, after some research into technology it became clear that similar ideas have already been developed. Therefore, we looked at the broader problem and decided to offer dissolving lenses for treatment of glaucoma”, says Viktorija.

On their travel to Silicon Valley the students from Kaunas were accompanied by their teacher Rita Jucevičienė, Associate Professor at KTU School of Economics and Business. She is convinced that the success at Silicon Valley Innovation Challenge is the first step towards achieving great goals.

“At the moment, glaucoma patients have to put in highly concentrated eye drops three times a day as the rate of the medicine absorption is only 5 percent. It is being calculated that the absorption rate of dissolving lenses can be 30 percent higher; the medicine would be less concentrated, therefore, less harmful to the eyes”, says Jucevičienė.

The idea introduced at the Silicon Valley Innovation Challenge competition has received a lot of positive reviews. According to Jucevičienė, although the recognition by the experts is very important, further development of the project depends on the students.

“It is indeed a very strong idea, however, for its further development funding is needed. We are thinking about the collaboration with KTU Startup Space, to look for other funding possibilities. In Lithuania, we have a growing and active startup ecosystem, therefore I see a perfect chance for success”, says Jucevičienė.