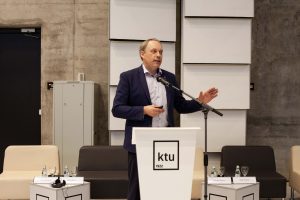 Eugenijus Valatka is the new Rector of Kaunas University of Technology

Eugenijus Valatka was elected the new Rector of Kaunas University of Technology (KTU) on 13 July 2018 by the KTU Council after the secret ballot. Doctor of Science in Chemical Engineering, Professor, Dean of the Faculty of Chemical Technology, Kaunas University of Technology E. Valatka will run and manage one of the leading universities in Lithuania and the Baltics for 5 years. The Rector will take the office on 10th of August.

11 Lithuanian and overseas candidates participated in the KTU Rector’s election.

The Rector is being elected in public international competition and appointed by the KTU Council. The open international competition for the position of KTU Rector complies with the Law on Higher Education and Research of Lithuania, KTU Statute and other legislations and was announced by the KTU Council on 11 December 2017. The deadline for the submission of documents for participating in the Competition was 28 May 2018, 12pm.

Berry juice processing by-products could reduce the risk of cancer

Kiran from India: “Lithuania gave me friends for a lifetime”

Enrich your life – become a mentor

2018-03-30
We are using cookies to provide statistics that help us give you the best experience of our site. You can find out more or switch them off if you prefer. However, by continuing to use the site without changing settings, you are agreeing to our use of cookies.
I agree